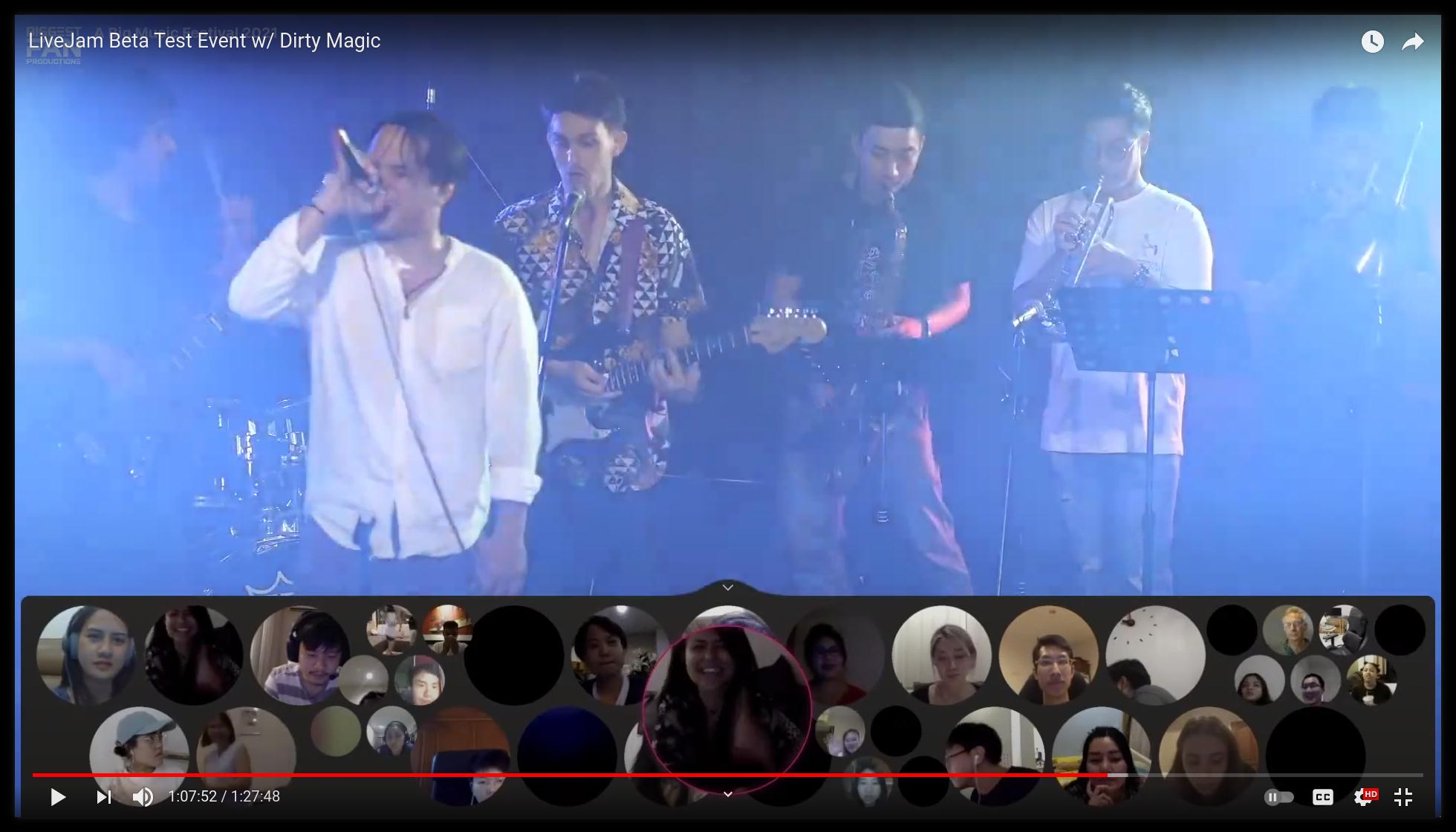 What's So Special About LiveJam?

In my past life, beside just being a tech geek, I was also an indie artist promoter - mostly for live music. That's actually how the initial "BiggestFan Productions" came into being back in 1997 when I was working with bands out of Atlanta. I worked with a LOT of up & coming bands. I've always had a natural talent for identifying, attracting, and developing potential talent (for both artists and technical people) and the main determinant as to whether or not a musical artist had "it" was whether or not they were able to distinguish themselves as performers rather than just carrying out a "recital". I would always talk to my band before an event and remind them - the entire purpose of a performance is to invoke an emotional reaction. If you put yourself out there, the audience will see that you're real and will respond because they want to see themselves in you and your success. That connection between artist and audience is what defines a performance. Without that connection, all you have is a recital - however technically adept, ultimately empty and shallow.

LiveJam creates performances. That's what's different about our platform compared to any other. We are all about the connection between artist and fan. You will see that everything we do is singularly focused on making the most amazing performance possible for both the audience and artist. That is our mission. We hope you feel that we do that better than anyone else now and going forward.

Last Thursday we kicked off our first ever public beta test. Everything we've been working on since June of 2020 led up to this event hosted at our secret R&D HQ in the heart of Bangkok. We had tested every component internally and at scale with test clients - but putting it out to anyone who wants to try across different platforms and networks invites all kinds of randomness and trouble. Naturally some of that manifested itself but we were able to percevere and deliver an exciting and fun performance for everyone while learning lots of lessons on how to improve for next time. It was a scary time for the whole team but I really can't think of a better way to launch a product like this then getting it out in front of people as quickly as possible so that's what we did.

Since we also livestreamed it to YouTube, you can click on the image below to see the whole thing and decide for yourself.

At the first comment in the video I point out some of the fun problems we ran into and also highlight spots in the video where our fans really responded. Definitely the 2nd half of the performance had a stronger connection with the audience once we turned on our "Fan SpotLight" feature where we select an individual in the audience and enlarge their image in the center for all to see. It really got the audience participating in the show rather than just sit there with blank faces like when watching a video. You could see the reactions of both the person in the spotlight and their friends in the audience as they sang and danced along with the band. We've got more ideas on how to do this that we'll be introducing in future events.

There was a feedback form at the end and we received lots of good responses. Over all - the vast majority of people attending loved the show and want more. The criticisms we received were also useful and we are working on addressing those as well. Will be detailing the responses and some upcoming features in next week's post so stay tuned.

Here's some behind the scenes pics so you can see what a "professional" LiveJam production looks like. We've actually got a special stage under construction but it got delayed so our construction guy got us a stage we could borrow for the first event. Note the sole wide angle camera behind the big screens. Because our focus was artist/audience interaction, especially sound quality, we stuck to a single camera for this first show. Our platform actually already supports multiple cameras and we anticipate a show will typically have 3-4 camera views on average. Some of the audience response was they wanted to see more views or close ups - we definitely will have you covered for that and some special surprises as well! You can see Pam down on the bottom right setting up the producer client system that makes it all happen. 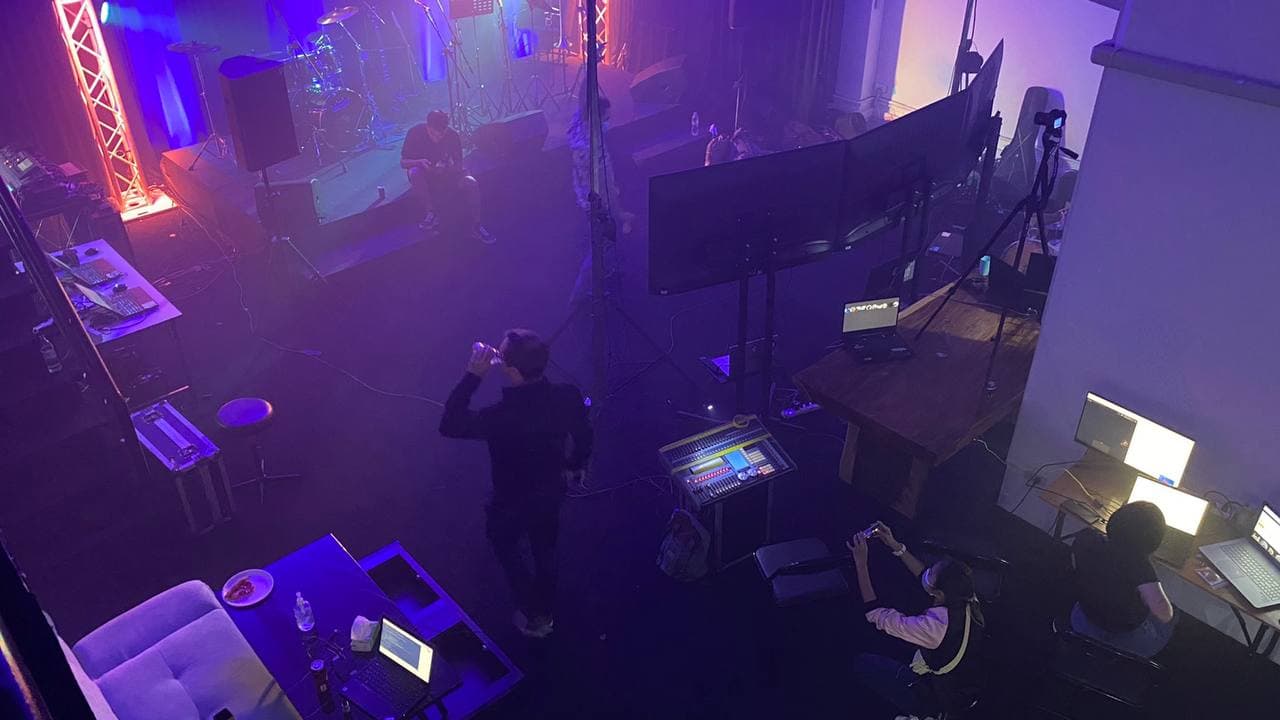 Here's a shot from the band's perspective. Notice the 3 huge screens setup that will show the audience for to the band - our venue client. There's also a smaller screen below that allows the band to see how they appear. Unfortunately the venue client crashed the moment we put the first "Fan SpotLight" on so we scrambled to reset the view with another fan client projected to the big screen. Ahhhh the fun of beta tests!

Sound check! The band's here and the system is running. Lights are up so we can get the camera focus and I'm crouched down in front of the band displays to make sure their view is working and that the band can hear the audience over the PAs. Sajal's here on the left checking the quality and performance of our network connections because video stream bandwidth tends to spike when lights go from dim to bright and back again. 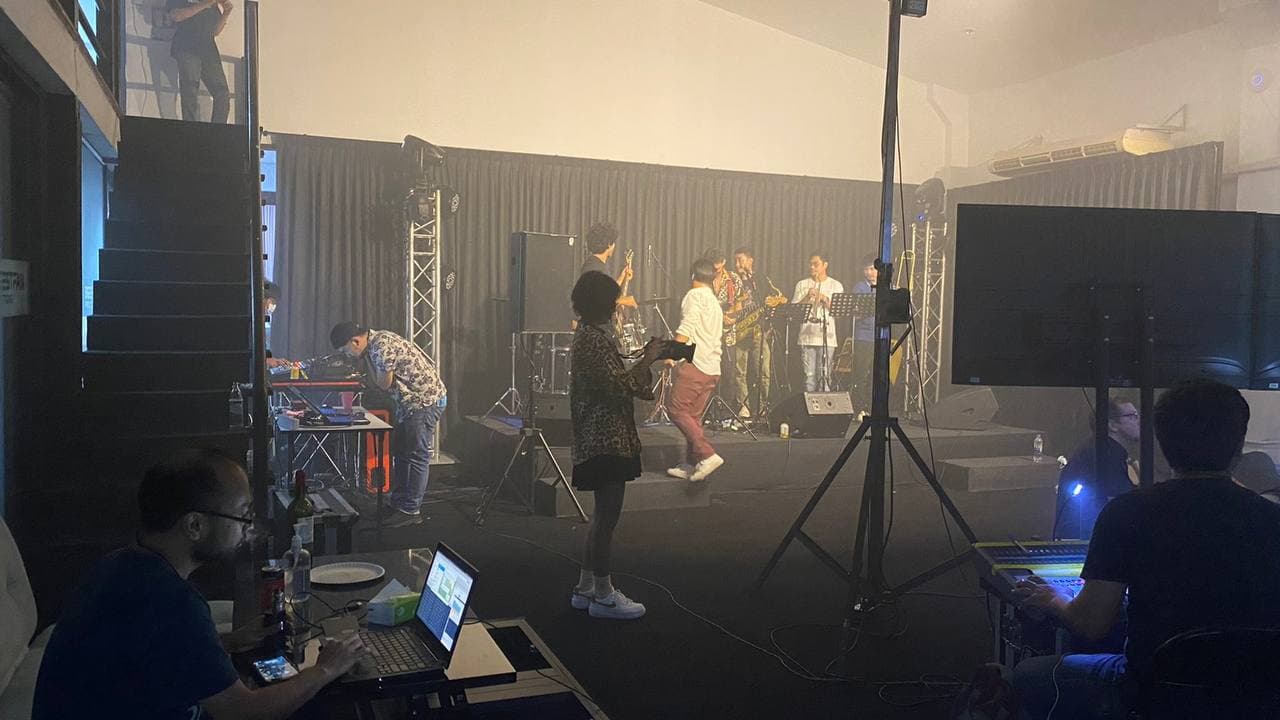 It's a wrap! The team's waving bye to our first ever public audience and celebrating a job well done! Hope you'll all join us for the next time!

This is only the beginning! We'll be announcing our 2nd public beta event shortly. Anticipating it will be at the end of April or early May and it will be on our amazing cool new stage! Be sure and sign up to be on our mailing list at BiggestFan so you can be first to know!