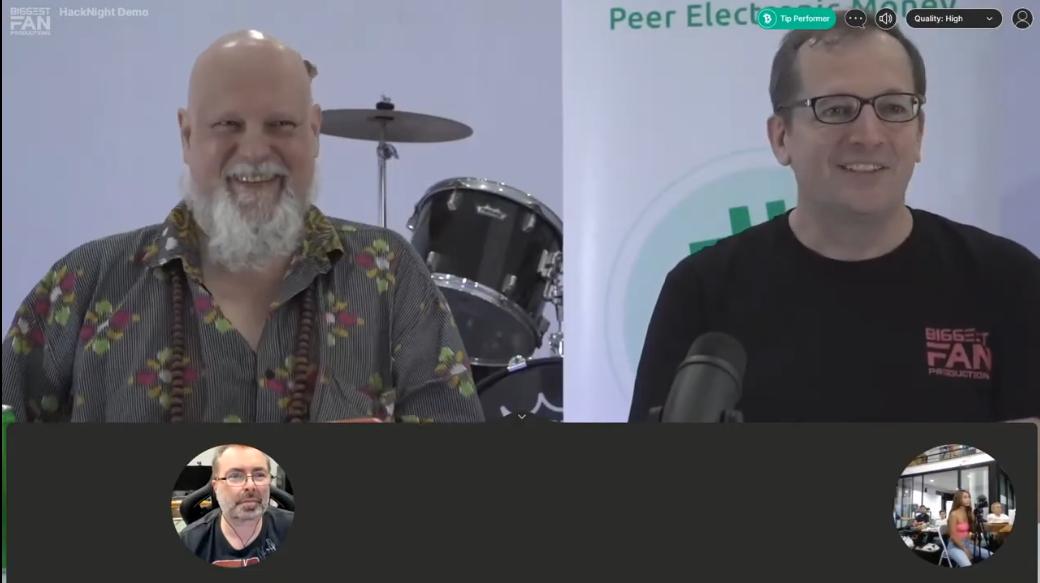 Hacknight Test from US Server!

Chief Fan, Ben Scherrey, writing to you from the secret Bangkok HQ for BiggestFan Productions once more. Last week we tried out an early prototype of a non-music oriented platform - basically an online talk show. Our company co-sponsors a local tech meetup called BKK/HackNight along with Jaja of Bangkok BitcoinCash where we eat Pizza Mania pizza and chat about technical stuff that hopefully interests both geeks and non-geeks alike. The presentation we did last week was definitely oriented towards the geeky side. Jonas Karlsson did an in-depth introduction/demo to his minimalistic Forth implementation running on his demo 6502 Javascript emulator and presented on the demo of our prototype platform! A demo of a demo on a demo.... and it's pretty much worked completely as expected so the demo gods smiled upon us and we were not turned into a crater for our hubris. Only actual downside is the presentation mic picked up the remote viewer during the Q&A period while asking a question and resulting in a slightly annoying echo. Looks like the mic wasn't setup to be as directional as we expected and should be addressed with our next event. You can check out the video of the live stream here:

Jonas did a great job and it's interesting that the entire demo was operated from his little Android mobile phone! How cool is that?!?!? Imagine running an entire conference on mobile devices. We're likely to be the first to make that possible. Another key part of this is that the whole thing was run via our first ever USA deployment even though we were hosting it from Bangkok. This really pushes the limits of our 1st generation low latency technology. This is the beginning of both how we start support for international users and demonstrate how the system can scale (effectively unlimited) through our federation model and still provide relatively impressive low latency even across the international gateways. Expect to see more of this protype being tried out in the next few weeks. Just this little demo gave us lots of useful data which we've already turned into performance improvements for the overall platform.

Next Music Event in the Works

Don't worry that our move into the real-talk space is going to distract us from our first love, live music. The next event is in the planning stages and a local Thai music organization composed of a few tousand performing artists has reached out to us to do a show in a few weeks. What bands will perform and what date it will be are still being worked out but we anticipate this to be the first of many such events. Looks like it will also be our first ticketed event so that the bands can get paid some money and will probably be limited to 200 tickets. Absolutely everything I just said could be proven false within a matter of hours but this is how I see it shaping up so far and we're quite excited to see the Thai indie music community coming together to overcome this pandemic's impact on their ability to perform and hope it will demonstrate that BiggestFan Production's LikeJam is the way out and the way forward! Stay tuned for an announcement on this report service! Oh! One thing I can tell you for sure - if you're on an Apple Device you'll be able to try out the first verion of our iOS support!

While this report is short, it's not because there's not even more going on than ever before. But what's really got us going is that we're putting together a couple of models/pitches for raising money to take BiggestFan Productions forward. We've been asked a lot but haven't been prepared to accept additional investment because we want the product to be in a stronger state so our cost of capital will be lower and our valuation higher. Well now we're pretty much at the point where it's time to respond and reach out to all those who have expressed an interest and see what our options are. Naturally we're looking for strategic partners who stand to offer something more than just money - but we'll take money too! ;-) This is not a request for an investment or anything like that. Just letting you all know what's going on behind the scenes and hopefully in a few months we'll have some bigger news to announce as BiggestFan goes beyond Thailand and SEASIA to take the good news to the world!

Stay tuned in and turned on! All the best,