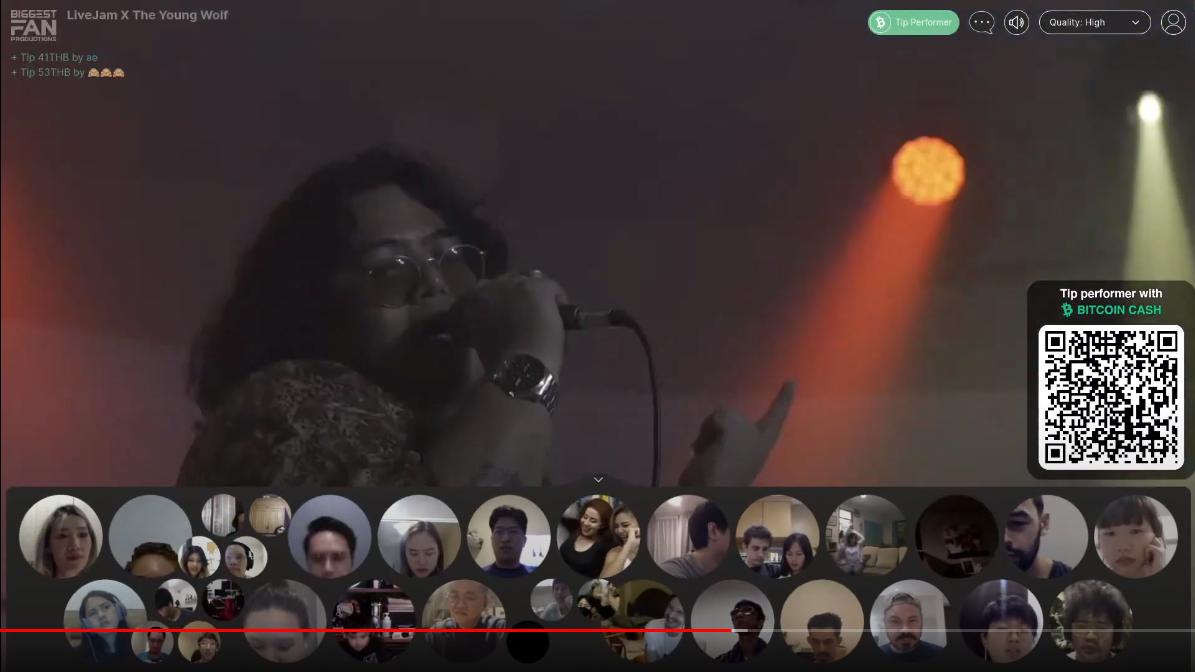 Chief Fan, Ben Scherrey, here again from the secret BiggestFan HQ in Bangkok coming at you with the aftershock of the phenomenon of "Young Wolf" on LiveJam last Friday Night.

Despite only being able to support audience participation in Thailand and still not having support for iPhone and iPad devices, we had an excellent turnout for the event and the response so far is that people were blown away. Several bands and other people in the business have reached out to us asking how they can participate in our system which is really inspiring to us. We will definitely make this happen for you all!

Let's just jump right in and see how it went! Make sure to set your quality level on playback to 1080p so you can get the same experience as people on our platform had! The video and sound are great!

If you missed the show, you can check it out for yourself at the YouTube playback. Naturally, being a beta test, we had our issues. For some reason there was a strong echo during the beginning when introducing the band but that was cleared up. Also, most frustrating, was that due to a change in the way the spotlight feature works, we could not put anyone in whose webcam didn't produce at least 480p video - which was more than 80% of the audience. So if you wonder why you weren't put in the spotlight during the event - that's why - we simply couldn't. This show it's clear that some people came dressed for the event and were doing cool things to be part of the action. I was really sad I couldn't put them in the spotlight but, since we can see the whole audience, their efforts did not go unnoticed and can be enjoyed on the YouTube playback. These issues and others will be fixed for the next event.

My favorite new capability was multiple-camera angles and our great new stage. This event we had 3 cameras, one fixed and two mobile, which seriously increased production values for the show. I had concerns about whether a white stage would light up properly and balance well with the band on camera. Fortunately those concerns were completely misplaced and the stage and lighting were amazing! We got lots of comments on that.

One of the coolest new features we got deployed for our second public beta event was the ability to tip the band with BitcoinCash. I demonstrated the speed and ease of the process before introducing the band and 27 tippers, 8 of which were from YouTube (so likely overseas viewers) gave it a try! Thanks to the BitcoinCash community for supporting our working musicians!

We will be adding support for buying "FanCoins" on our website before the event (or during) using credit cards or bank transfers. You can use these to tip the performer and also to buy merchandise which we hope will be for sale soon. We expect "FanCoins" to be working for the next show (TBD - but soon!).

Biggest priority of BiggestFan's crack dev team is getting support for iOS working so that iPad and iPhone users can fully participate. This is in the works now.

We've also got some audio improvements going and are working on some codec issues so we can get a better experience for fans on lower bandwidth internet connections.

Soon we will have a deployment so that Fans outside of Thailand can join and will probably demonstrate this in about a week with a special event showing a new use of the technology. Hope to announce this in my next report.

The team is still inspired by our second great event and striving to make the next one even better. Until next time - keep jamming!