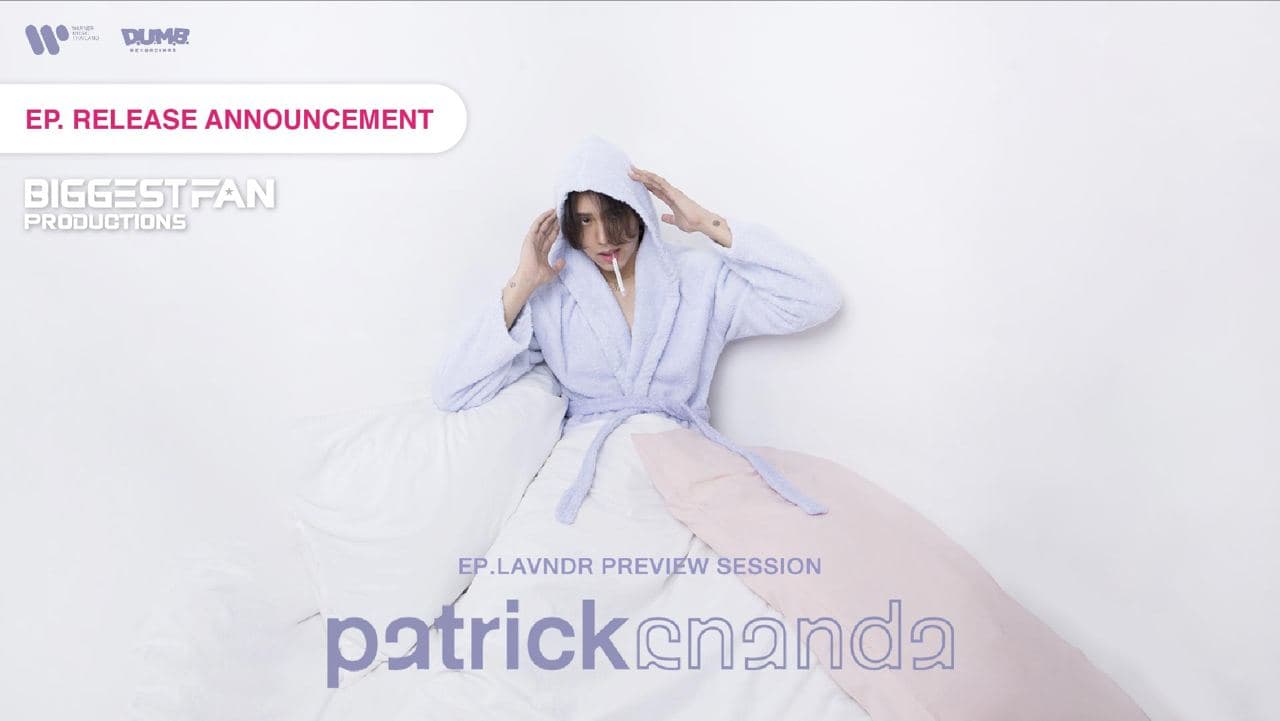 Chief Fan, Ben Scherrey, reporting from the secret Bangkok HQ for BiggestFan Productions once again. We've moved the weekly reports to Wednesdays (BKK Time) because it is on Wednesdays that we have our twice monthly "corporate governance meetings". It is these meetings where I review how our business and technology developments are proceeding with my crack biz & dev teams and we decide what opportunities to pursue and which we have to, often sadly, decline because there's just so many great things that we're in the middle of. So reporting a day before this event means a lot of news gets delayed by nearly a week that could be brought to you in a more timely manner.

Speaking of timely manners - I'd like to politely share with you a picture of what was going on in our office earlier today... 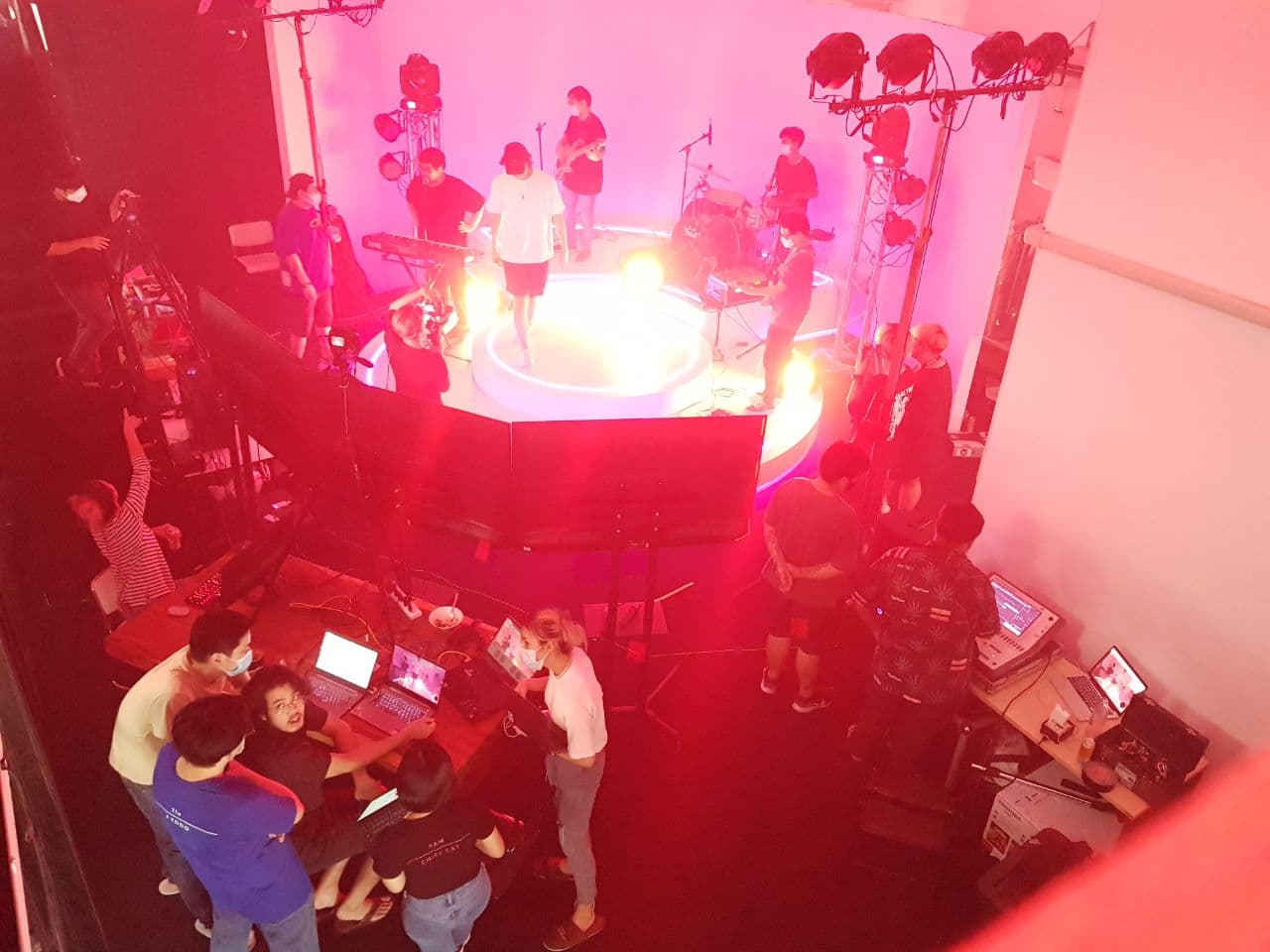 Yes that is a real sound check in preparation for a special private event happening tomorrow - the new EP release announcement for up & coming Thai pop singer, Patrickananda on D.U.M.B. records! Not surprisingly, the lock downs have put a serious damper on the music business everywhere including Thailand. D.U.M.B. records and Patrickananda, who has something like 16 million views on his last YouTube videos, have been working hard to get his new EP done along with a new music video and the press interest in this event is WAAAAY larger than what is allowed under Thailand's active rules limiting large gatherings.

Fortunately, the record label and production company reached out to BiggestFan Productions and asked if we could help - which of course we said "Heck yeah! Let's do this!" So after a quick review of our platform and a demonstration of how we can call on individuals from the audience to ask questions in real-time live multi-way video - we were booked for this great event at whatever capacity they like.

The bio from D.U.M.B. records on Patrickananda reads as follows "A SELF-MADE SINGER-SONGWRITER WITH AN UNMISTAKABLE VOICE. HIS MUSIC IS A NEW TYPE OF ALTERNATIVE R&B, COMBINING TRADITIONAL R&B RHYTHMS WITH MODERN ELECTRONIC SONICS, LAYERED TOGETHER TO CREATE MUSIC THAT IS TEXTURED AND MULTI-DIMENSIONAL. HIS DEBUT SINGLE, POLAROID, WAS A CRITICAL SUCCESS, IMMEDIATELY BEING PLACED ON APPLE MUSIC THAILAND’S ‘THE BEST OF 2020’ PLAYLIST, AND HELPING ESTABLISH PATRICKANANDA AND DUMB RECORDINGS AS MUSICAL INNOVATORS IN THE LOCAL MUSIC SCENE. HIS SINGLE KON KLAI (FAR AWAY) HAS 10 MILLION VIEWS ON YOUTUBE, AND HE IS CURRENTLY WORKING ON HIS NEXT EP WHICH WILL LAUNCH IN JUNE" Absolutely the kind of artist that BiggestFan Productions aspires to help support so we're please to be a part of it.

D.U.M.B. records is a local Thai partner of the global music power house, Warner Music, so this isn't some fly by night operation. Tomorrow's private event is anticipated to have over 100 reporters covering it - all on our LiveJam platform. There will also be a live performance of a few of his songs and a reveal of his new music video. Since there's an embargo on this music we can't stream it live to the rest of the world but we will be able to post it in a few days on our YouTube channel so you can see how well the platform works for promotion as well as performances soon enough.

D.U.M.B records picked us not only because we could scale better than any other platform, but mostly because once they saw the clear audio & video quality and amazing low-latency, there just wasn’t any other technology out there that could compare to what even the beta version of LiveJam has to offer right now. It also didn’t go unnoticed when our first two performers, “Dirty Magic” & “Young Wolf” received a lot of fan and industry attention after their quality performances on our platform. “Dirty Magic” even cut a deal to do a music video which they recorded a few weekends ago in our R&D venue which we hope will come out soon. We also got good feedback on our green room and food & drink stocks from the artists. ;-) Take note performers & promoters alike - LiveJam gets you noticed!

In other progress - we now have TWO simultaneous Apple iOS development efforts ongoing. We seem to have figured out a work around hack that will get our platform working on Safari browsers on iOS - iPad & iPhone - and that should be working by the next live music beta event. In addition to that, we're close to getting the fundamental parts of the native iOS app which will support our 2nd generation low-latency real-time technology working which puts us in a likely release of July for an app you can download from the App Store. The native Android app will be released at the same time so progress on our more advanced multi-way streaming capabilities is moving at a rapid pace.

There's a punch down list in a secret location in our secret HQ that covers all the things we need to get done before we exit beta and go into commercial release. That list grows shorter each week. Rather than taking up three columns on my giant white board when it started, it is now down to just over half a single column. Anticipating another few beta events and we should be ready for our first commercial event that we'd feel comfortable with selling tickets for. (We already have a nice ticket sales system which some interesting new features ready to go!) We've had SEVERAL artists reach out to us wanting to perform on the LiveJam platform. Don't worry guys & gals - we will definitely be getting back with you soon once we have a better idea of when we can schedule shows.

Due to the great opportunity with Patrickananda and D.U.M.B. records, we've had to push a few things back by a week or two but the next beta test will be announced soon and it will be the first chance for iOS users to participate in the audience. Also, I expect next week's report to detail an announcement of the launch of a new use of our technology and the reveal of our 2nd business model use case. This time supporting international fans in the multi-way audience rather than just limited to Thailand - something tons of people have been asking me for but have, to date, had to be satisfied with the one-way live stream on YouTube. Well hopefully that's about to change - and the world will never be the same again!

Stay tuned in and turned on!